“The Enigma” Diamond goes up for auction

Sotheby’s will auction, between February 3 and 9, the black diamond better known as “The Enigma”. This diamond weighs 555.55 carats and is the largest faceted black diamond ever to be auctioned. It also has an entry in the Guinness Book of World Records (2006) for being the largest cut diamond in the world.

The specific origin of the diamond (also nicknamed the carbonated diamond) is uncertain, with scientists believing it may have come from outer space due to the scarcity of specimens of this type. 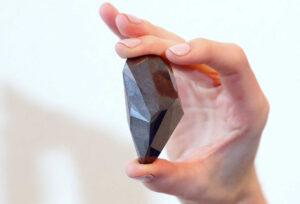 Most carbonated diamonds are between 2.6 and 3.2 billion years old. Geologist Aaron Celestian (Los Angeles Museum of Natural History) believes that they may have formed “deep in the Earth’s interior,” “at impact sites where a large asteroid hit the Earth,” or even developed “in space and then fell to the Earth’s surface.”

“The Enigma” was not revealed to the public prior to the auction, and should sell for between €3.5 and €6.2 million, with the auctioneer also accepting payment by cryptocurrency. The diamond’s current owner has had it in his possession for about two decades, and not much is known about its history before that.

“The Enigma” diamond has already been on display in Dubai in January, and will now be auctioned by Sotheby’s in London.